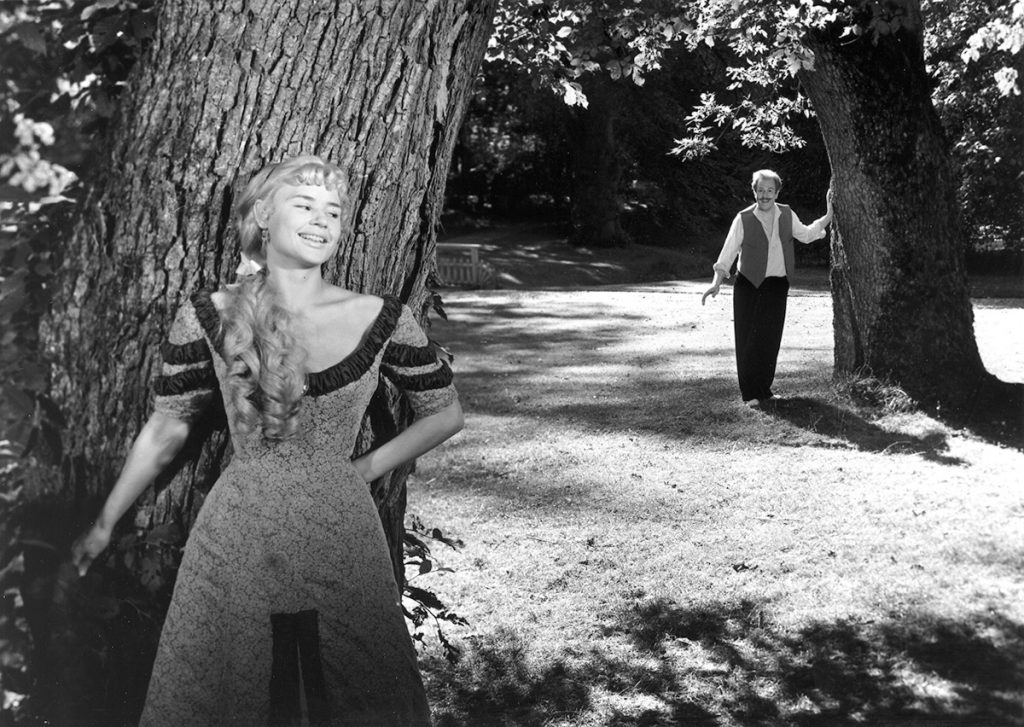 Apart from a few scenes filmed at the Råsunda studios, Smiles of a Summer Night was shot in Skåne. The filming process, which began on 28 June and ended on 29 August, 1955 (not including two days of additional work carried out in November of the same year), proved to be something of an ordeal. In Images: My Life in Film, Bergman describes it as follows: ‘So, we started after midsummer – the hottest summer in living memory. It was dreadfully hot. […] As soon as the actors were ready and I’d said “Roll camera” and “Action”, the sweat started dripping from their faces. It was extremely demanding and I felt sick all the time. […] It took us fifty-five days and we were all pretty much on the verge of a nervous breakdown. […] You don’t notice it in the film but it was made during one of my darkest periods.’

In the film, lawyer Fredrik Egerman takes his young wife Anne to the theatre in an unnamed small town in Skåne. The lawyer’s previous lover, Desirée Armfeldt, is playing the lead in that night’s performance (the theatre itself is in fact the Ystad Theatre). After the show, Egerman visits the star of the show in her dressing room and they head off together back to Armfeldt’s home. They walk along the streets of Ystad, such as Skansgatan and Klostergatan, before flirting with each other at the monastery pond, where Egerman happens to fall into a pool of water.

Later on, we find ourselves at home with Count Malcolm and his wife Charlotte, who are locked in a kind of love-hate relationship. Charlotte rides in via a leafy avenue through a doorway and into the courtyard in front of the couple’s castle, before then entering the building, which is nowadays a café. The locale, which is presented as being rather austere and inhospitable, is in fact Övedskloster outside Sjöbo. The scene took a whole day to film and, as an article in Ystads Allehanda explains, there was quite a commotion at the manor.

Most of the film, including its most significant scenes, was shot at Jordberga Castle in the municipality of Trelleborg – which plays a somewhat freer role than Övedskloster. This is the residence of Desirée Armfeldt’s aging mother who, upon being asked to do so by her daughter, arranges a rather special dinner at which all the guests are engaged in either open or secret relationships with each other. The entertainment continues all night and includes dinner table betting (a meal arrives on Jordberga china), a sortie involving a horse and carriage, Russian roulette in the gazebo and frolicking at the mill. In the final scene set at dawn, the story is told of how the night smiles three times: Firstly, between midnight and dawn – for loving couples; secondly, just before dawn – for the jesters, the fools and the incorrigible; and for the third time, when the sun has just risen – for those who cannot sleep.