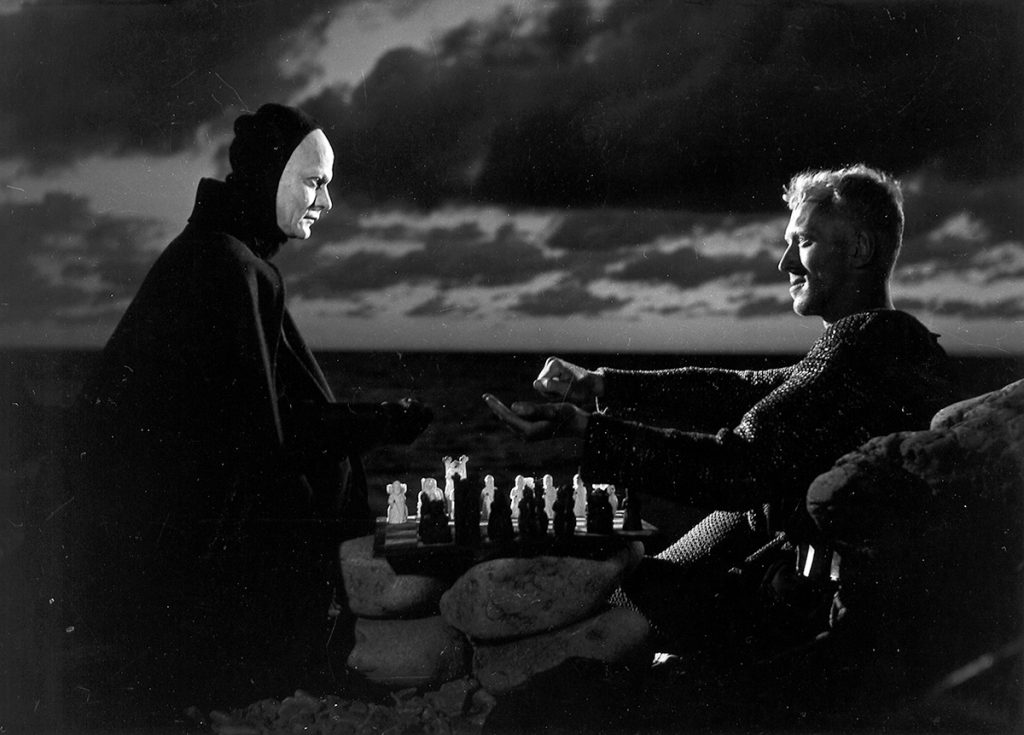 On the advice of Bibi Andersson, Bergman decided to abandon the light comedies to which he had devoted himself over a number of years. Instead he engaged in making this existential film, set in the time of the plague, about a brooding knight who plays chess with Death and meets, among others, a troupe of minstrels. The Seventh Seal was to become a favourite of the director himself and it is the Bergman film to which most reference has been made in popular culture.

Shooting began on 2 July, 1956, with the opening scene – that in which the knight Antonius Block (Max von Sydow) challenges Death (Bengt Ekerot) to a game of chess in the hope of postponing his demise – being filmed at Hovs hallar. Bergman had originally intended to shoot it on Öland’s limestone alvar against the backdrop of the sun rising in the east but ultimately opted for Hovs hallar and a sunset in the west. The director drew his inspiration from Death Playing Chess, a medieval painting in the ceiling of Täby Church. As the cinematographer Gunnar Fischer recalls, filming the scene was not entirely without its difficulties, not least in having to drag a 100-kg camera down onto a pebbled beach.

With regard to lighting the characters, Fischer said: ‘You can see from their profiles that they both have 2-kg lamps behind them, “so that must mean that there are two suns,” they said to me. Yes, that’s probably right, I said. But if you can accept that Death’s sitting there playing chess, you can also accept two suns …’

Also filmed at Hovs hallar are the scene in which Block eats wild strawberries with the minstrel family and the film’s closing shot in which Death leads his victims in a danse macabre. In Images: My Life in Film, Bergman writes:

‘We came up with the final scene – where Death dances off with the travellers – at Hovs hallar. We’d packed up for the day, since there was bad weather on the way. Suddenly, I caught sight of this remarkable-looking cloud. Quick as a flash, Gunnar Fischer set up his camera. Several of the actors had already gone back to camp, so some grips and a couple of tourists danced along in their place, having no idea what it was all about. So, this image that later became so famous was in fact improvised in just a few minutes.’